What is Inflammatory Bowel Disease (IBD):

Inflammatory bowel disease describes several conditions that involve chronic inflammation of the bowel. Ulcerative colitis (UC) and Crohn’s disease (CD) form the majority (90%) of IBD, whereas Indeterminate colitis is seen in 10% of patients. UC effects the large bowel (colon and rectum) whereas CD can occur in any part of the intestine (from mouth to anus). IBD may be associated with extra-colonic manifestations such as, Liver (primary sclerosing cholangitis), Skin (pyoderma gangrenosum), Arthritis (ankylosing spondylitis) and others.

Irritable bowel syndrome (IBS) is not part of IBD. IBD is an autoimmune disorder, where the patient’s immune system attacks the gastrointestinal tract. This is a similar principal to other autoimmune conditions such as: rheumatoid arthritis, systemic lupus, or psoriasis. IBS does not cause inflammation of the bowel, but rather the bowel does not work as it should. 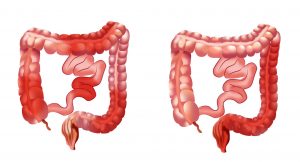 There is a different distribution of inflammation in Crohn’s Disease and Ulcerative Colitis. In CD there are skip lesions, where as in UC it is usually continuous.

Who is at risk:

The exact causes of IBD are not know, therefore it is difficult to predict who is at risk, however a combination of genetic, immunological and environmental factors appear to be associated with the disease. There are typically two peaks of onset, before the age of thirty and after the age of sixty. IBD is more common in patients with a family history of this condition.

What are the symptoms of IBD:

Patients with IBD typically follow cyclical periods of flare and remission. The manifestation of symptoms variable in different patients as this depends on severity of inflammation and the areas of bowel effected. Symptoms of IBD may include:

How is IBD diagnosed:

There are a number of tests that are sometimes used to diagnose IBD. Not all tests are required for all patients, this depends on the distribution of the disease within the bowel. The potential tests include:

What is the treatment of IBD:

IBD is best managed in a team approach by a gastroenterologist and a colorectal surgeon. Unfortunately, IBD is a chronic condition and therefore requires life long follow up. Treatment can be differentiated into:

Management is patient specific and may require major surgery. In some cases, early surgical intervention may “reset the clock” and help achieve lifelong remission.